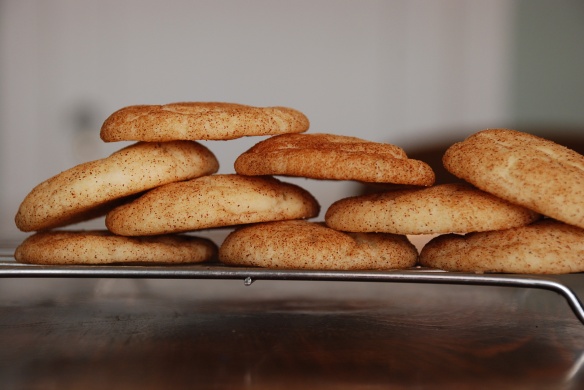 This recipe originally came from my mother. I’ve adapted it slightly. It makes a straight-up 100% traditional and delicious cookie. You can tell a good snickerdoodle recipe by the combination of baking soda and cream of tartar. Baking soda (a base) combined with cream of tartar (an acid) works as a chemical leavener in the presence of moisture, such the egg in the cookie dough. Baking soda combined with cream of tartar can also be used as a substitute for baking powder (which is a base and an acid already mixed together). You could, technically, use baking powder in snickerdoodles instead, but they wouldn’t taste the same.

My mother’s original recipe calls for a combination of butter and Crisco. I am too much of a food snob to bear having Crisco in the house, let alone cook with it, so I use all butter. I also use fancy, extra strong Vietnamese cinnamon, because, you know, food snob. It really does make a difference.